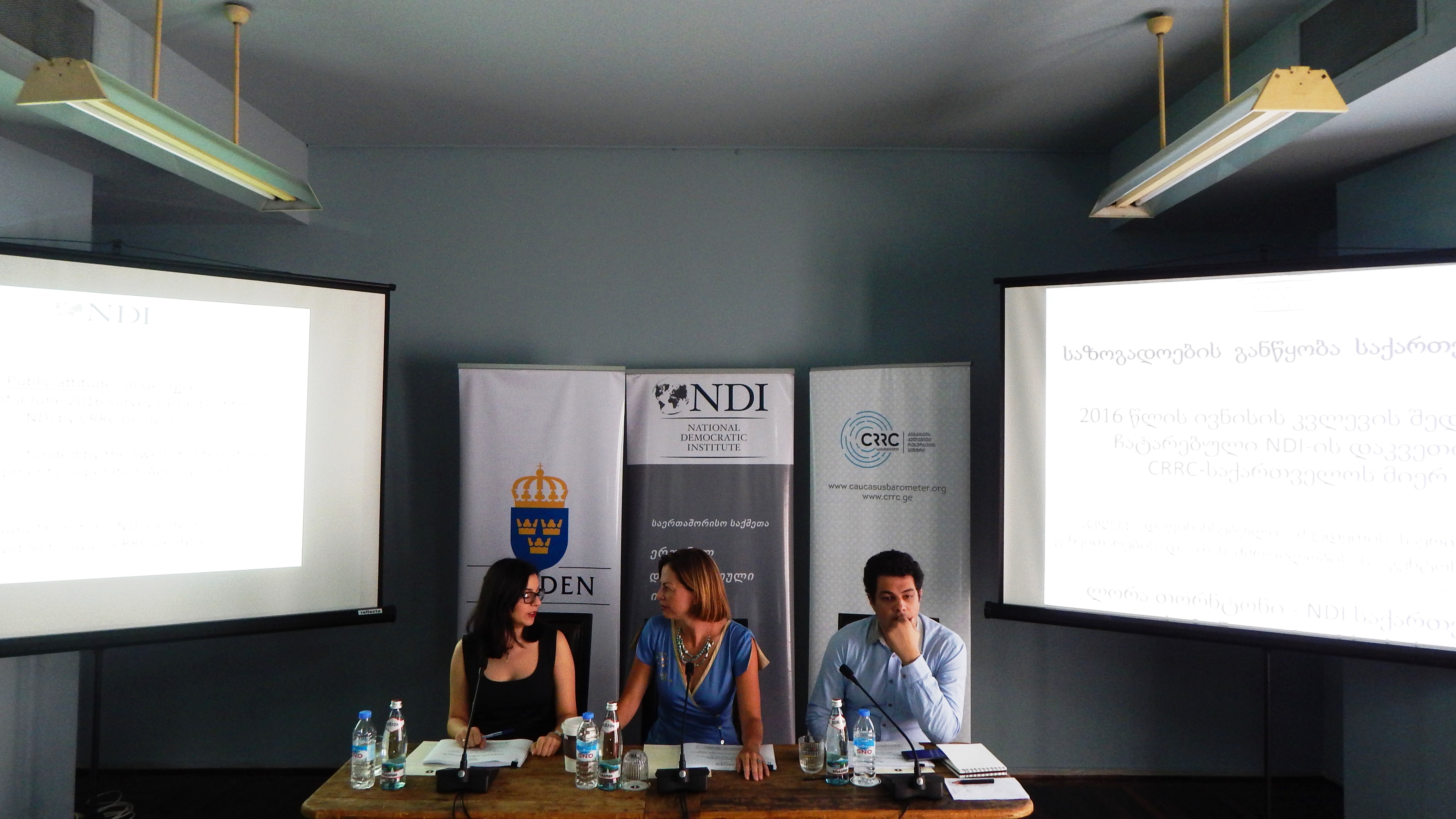 On July 27, 2016, the results of Public Attitude survey carried out for the National Democratic Institute (NDI) by CRRC-Georgia were presented to public. Poll results released today by the National Democratic Institute (NDI) and CRRC Georgia reveal that the majority of Georgians still believes the country is not changing at all (34%) or going in the wrong direction (33%), while a quarter (25%) of Georgians believe the country is going in the right direction. This represents a steady decline over the last few years but a slight improvement since NDI’s March 2016 poll. Georgians are more positive about their personal situations, with 17% stating that their households are better off, up from 10% in the March 2016 poll, and 19% reported that the living conditions in their community have improved, a 10 point increase from 9% in the August 2015 poll.

There were also small improvements in Georgians’ perception that the government is making decisions that matter to them, up to 42% from 37%.

Georgians who identify themselves as undecided about their political and electoral support are less positive in assessing the country’s outlook. Citizens who are decided about how they will vote in October are more likely to believe that the country is going in the right direction, the government is making decisions that matter to them, and the living conditions in their community have improved. Further, the undecided rank the country’s performance on jobs, poverty, prices, governance reforms, and crime less favorably than decided voters.

“Undecided voters are less positive on key economic and social indicators,” said Laura Thornton NDI senior director. “To earn their votes, candidates in this election period quickly need to improve their communication about their party’s achievements and present concrete plans for growth and reform.”

On foreign affairs, Georgians’ support for the country’s European Union (EU) and Euro-Atlantic aspirations is stable, with NATO support at 64% and EU support at 72%. Most citizens (53%) believe the country will benefit from EU-Euro-Atlantic integration, while 29% favor abandoning integration for closer ties with Russia.

There are differences in foreign policy perceptions between politically decided and undecided Georgians, with decided voters more enthusiastic about the country’s European and Euro-Atlantic aspirations. Only 49% of undecided see benefits of Euro-Atlantic integrations compared to 58% of their decided counterparts. Decided voters are also more likely to select an exclusively “pro-Western” foreign policy agenda (17%) than undecided (11%). Almost one-quarter (23%) of Georgians receive news from non-Georgian language media sources, mostly Russian outlets, including the majority of citizens in minority settlements. Further, those who consume Russian media have different views on the nation’s foreign policy, expressing more skepticism about the country’s European and Euro-Atlantic goals.

“Georgians continue to demonstrate their commitment toward the EU and NATO,” said Thornton. “However, it is important that those supporting such ambitions use focused demographic and geographic targeting to reach more skeptical populations, including efforts to counter Russian messaging, with particular attention to undecided voters given the role they will play in the upcoming elections.”

NDI surveys public opinion to help Georgian stakeholders diagnose and address issues of public concern by providing accurate, unbiased and statistically-sound data. The poll was developed in consultation with party, government and civil society leaders, and aims to capture the most relevant information to foster the development of responsive policies and governance. A wide range of leaders from across the political spectrum have reported that the polls are important to their work and encourage continued polling. The results reflect data collected from June 8 to July 6 through face-to-face interviews with a nationwide representative sample of citizens of Georgia that included 4,113 completed interviews. The average margin of error is +/- 2.1 percent.