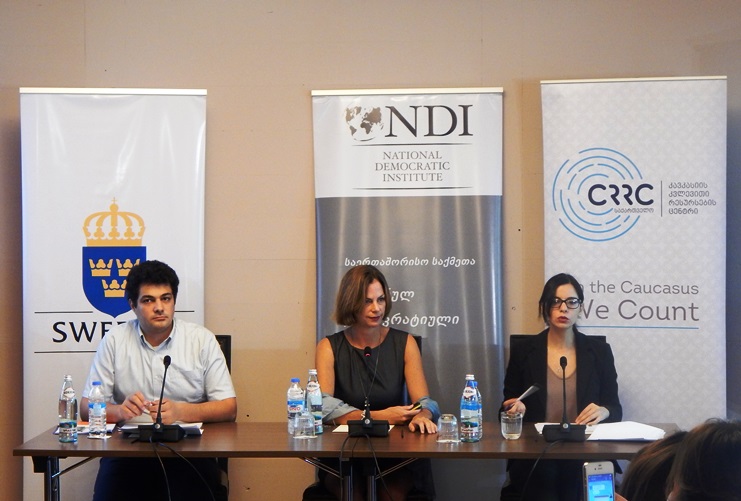 Undecided voters are predominantly young, with 64% of Georgians between the ages of 18 and 35 saying they are undecided.
“This level of undecided people just weeks before an election should be a wakeup call for all the contesting parties,” said Laura Thornton NDI senior director. “There is an obvious need for greater outreach not only during this campaign but also in between elections to address the clear disconnect between citizens and their representatives.”

58 percent of population named a specific party closest to them - 19% picked Georgian Dream-Democratic Georgia, 15% United National Movement, 5% for both Alliance of Patriots of Georgia and Movement State for People, 4% for both Free Democrats and Labor Party. Of likely voters, only four parties came close to the 5% threshold -- 19% said they would vote for the Georgian Dream, 14% for UNM, and 4% for both Patriots Alliance and Movement State for People. When asked who they think would win, however, 36% of Georgians responded Georgian Dream and 11% UNM. Among undecided voters, 31% believe GD will win and only 6% think UNM will do so.
Even among those few who have a political opinion, future vote preferences are not particularly strong, with only half (55%) describing their support for their selected party as “strong” and 41% saying “average.” Only 57% of decided voters would vote for the same party they did in 2012.

“Georgians overwhelmingly want to vote in the upcoming elections but have not yet made up their mind, making the election results unpredictable,” said Thornton. “The ratings for each of the individual parties are so low that they cannot be taken as a guide to the outcome of future elections. With 67% of Georgians planning to vote and 57% undecided, the numbers seen in the final election tallies will look considerably different than the numbers presented in this poll as the results will depend on how these undecided ultimately cast their ballots.”

NDI surveys public opinion to help Georgian stakeholders diagnose and address issues of public concern by providing accurate, unbiased and statistically-sound data. This poll in particular aimed to provide electoral contestants with important information about the needs and concerns of the electorate in order to shape and target their messages and campaigns. The poll was developed in consultation with party, government and civil society leaders, and aims to capture the most relevant information to foster the development of responsive policies and governance. A wide range of leaders from across the political spectrum have reported that the polls are important to their work and encourage continued polling. The results reflect data collected from June 8 to July 6 through face-to-face interviews with a nationwide representative sample of citizens of Georgia (except territories under the military occupation - South Ossetia and Abkhazia) that included 4,113 completed interviews. The average margin of error is +/- 2.1 percent.
Tweet