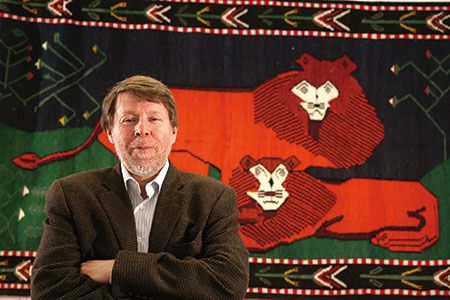 American Councils - Georgia, CRRC and ARISC invite you to join us in celebrating the 5th anniversary of the Works-in-Progress series!

The immense popularity of St George in Georgia has often been commented on, and some have even surmised that the country received its Latin name from the saint. Even if this etymology is false, there is no denying that a significant proportion of Georgian Orthodox churches — somewhere between 20 and 30% — are dedicated to this warrior saint; and icons portraying him mounted on a white horse, usually spearing a dragon, seem to be everywhere.

In this talk, Prof. Tuite will discuss the spread of the cult of St George among elite circles in Georgia and neighboring areas in the Middle Ages, and the diffusion of certain features of his representation and cult into popular religious systems, such as those of Svaneti and Khevsureti. Special attention will be paid to the pairing of localized George figures with a female supernatural counterpart, and the role of this pairing in traditional beliefs about (male) mobility for the purpose of obtaining resources.