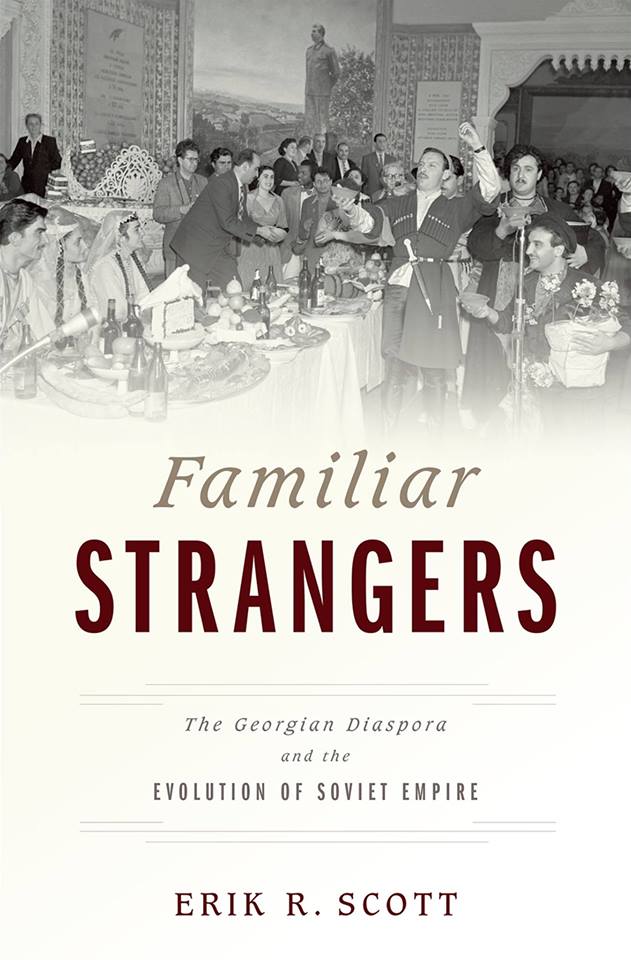 WiP - Familiar Strangers: The Georgian Diaspora and the Evolution of Soviet Empire
CRRC-Georgia, ARISC and American Councils present the 17th talk of the Spring/Summer 2016 Works-in-Progress season and a ***SPECIAL EVENT: A presentation by the author of his important new book***

A small, non-Slavic country located far from the Soviet capital, Georgia has been more closely linked with the Ottoman and Persian empires than with Russia for most of its history. One of over one hundred officially classified Soviet nationalities, Georgians represented less than 2% of the Soviet population, yet they constituted an extraordinarily successful and powerfulminority. Familiar Strangers aims to explain how Georgians gained widespread prominence in the Soviet Union, yet remained a distinctive national community.

Through the history of a remarkably successful group of ethnic outsiders at the heart of Soviet empire, Erik R. Scott reinterprets the course of modern Russian and Soviet history. Scott contests the portrayal of the Soviet Union as a Russian-led empire composed of separate national republics and instead argues that it was an empire of diasporas, forged through the mixing of a diverse array of nationalities behind external Soviet borders. Internal diasporas from the Soviet republics migrated throughout the socialist empire, leaving their mark on its politics, culture, and economics. Arguably the most prominent diasporic group, Georgians were the revolutionaries who accompanied Stalin in his rise to power and helped build the socialist state; culinary specialists who contributed dishes and rituals that defined Soviet dining habits; cultural entrepreneurs who perfected a flamboyant repertoire that spoke for a multiethnic society on stage and screen; traders who thrived in the Soviet Union's burgeoning informal economy; and intellectuals who ultimately called into question the legitimacy of Soviet power.

Looking at the rise and fall of the Soviet Union from a Georgian perspective, Familiar Strangers offers a new way of thinking about the experience of minorities in multiethnic states, with implications far beyond the imperial borders of Russia and Eurasia.

Professor Erik Scott (Ph.D. University of California, Berkeley) explores in his research migration and diaspora within and beyond the imperial borders of Russia and Eurasia. His book, Familiar Strangers: The Georgian Diaspora and the Evolution of Soviet Empire, looks at the USSR not simply as a Russian empire, but as an “empire of diasporas,” where politics, culture, and economics were defined by the mixing of a diverse array of mobile nationalities. Following the history of Georgians beyond the Georgian republic from 1917 to the present, the book examines the evolution of the Soviet multiethnic empire from the perspective of its most prominent internal diaspora.

He is currently at work on a second project, tentatively titled "Soviet Defectors and the Borders of the Cold War World," which follows the unauthorized movement of people across Soviet state lines. Through an examination of the political and cultural phenomenon of Soviet defection, the project investigates how the national and ideological borders of the Cold War were defined, disputed, and transgressed.

In addition to his historical research, Professor Scott is the author of several publications on contemporary Russia and Eurasia.

The purpose of the W-i-P series is to provide support and productive criticism to those researching and developing academic projects pertaining the Caucasus region.
Tweet